As many moms know creating the perfect nursery is probably the most stressful but necessary thing to do to complete the nesting process for motherhood. Our story is a little different!

When we found out we were pregnant we were renting a condo in Coquitlam and had a roommate! We eventually found out they were selling and we would have to move! So we made the tough decision to move back to my father-in-laws till after Pearce was born since we were ready to make the big purchase of our first home.

We welcomed Pearce into the world 2 weeks after moving back. Soon after Pearce was born we started looking for our first home. Once we found it we wouldn’t move for a few months. We ended up Moving in Nov 26, 2015, Pearce was just over 3 months. At this time Pearce was still sleeping in our room, in his bassinet. I knew that I wanted to make a very special room so I started gathering ideas and in January 2016, we created his nursery, here’s the process.

As we plan on having another baby/babies ( if my husband caves) we knew that creating a nursery which was unisex was important to us as we would eventually move Pearce to the larger bedroom and have a new baby in the nursery.

When I had Pearce, we had chosen to keep the gender a surprise so everything was gender neutral and we had grey and yellow everything, with chevron grey as a strong part of the baby’s things. So we kept these colors as our colors for the nursery.

I scowered Pinterest for months, I tossed around the idea of doing chevron stripes on the wall however I found one picture that really stood out to me.

When I showed my husband he liked it to! So we had our plan! I went off and got the paint and we spent a weekend painting the bedroom.

For me, from the beginning I knew I wanted white furniture, it just reminded me of my first childhood bed. My first bed was a white daybed which I absolutely loved! So we got our beautiful crib at sears, it was a gift from my sister Laken.

When we brought home the crib we actually ended up getting the wrong one and we had to go exchange thankfully sears was really good about getting me a white crib it wasn’t the one I had originally picked out but I liked it better, this crib is now discontinued. But similar styles are available on sears.

After getting the right crib, my mother in law and Mumma my husbands grandma purchased our beautiful bedding from Carousel Designs . It fit our theme perfect! We have also been featured on their instagram @carouseldesigns . I have been super impressed with the quality of the products we received, I think Pearce has too! 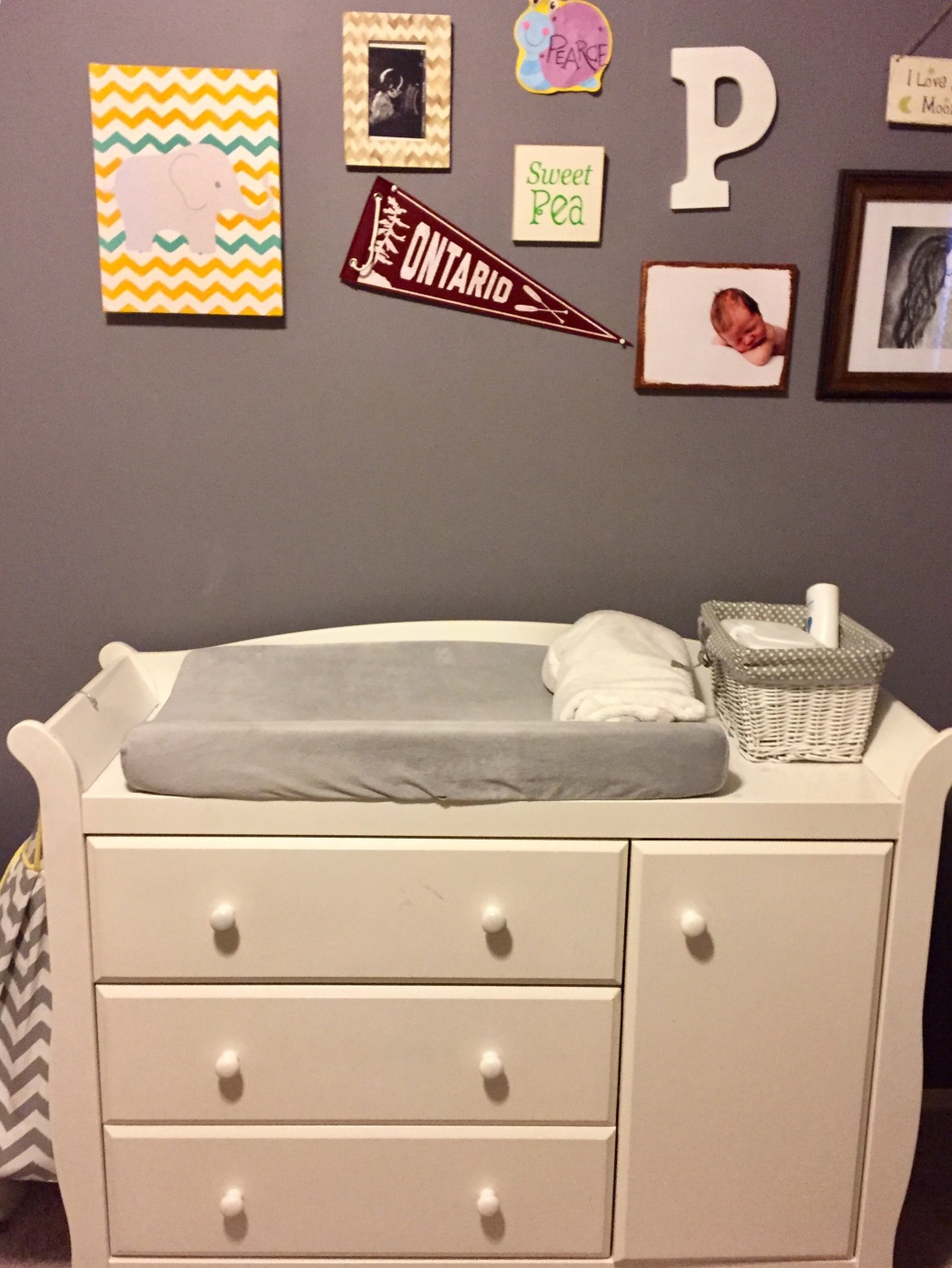 Next I re-finished my old dresser for his room (still need to get more knobs), and we purchased a change table off an old bidding site, to me it was not important to spend money on a change table due to the limited time you actually use one, and we got a wicked deal on one that fit perfectly with our nursery! I also picked up a glider chair at a local garage sale that I still need to re-finish!

A few of my favorite items that I purchased:

was our Levana Baby Monitor, we purchased the one with 1 camera, that can have additional added for later so that we can have just 1 monitor with future babies. We have the Aria monitor, it records video, and allows us to talk back to Pearce

I am absolutely obsessed with Pearce’s night light, it is also a sound maker, it comes with 8 different sounds, 4 white noise sounds and 4 musical sounds as well as a star projector onto the ceiling and the belly lights up for a night light.

When I first set up Pea’s Nursery I didn’t think a humidifier was needed but as each cold came and went, we decided to get him one. This one works great and also has a night light feature. The humidifier runs for 10 hours.

I absolutely love the baby mobile I got for Pearce, it matched his room perfectly. Purchased from Target, it makes noise and turns.

Something I definitely don’t think worked out for us was the soft fold away toy box you see featured it’s by Skip Hop and Pearce always leaning on the edge bent it pretty bad!

One thought on “Pea’s Nursery”