The thought of having a two-year old child is absolutely crazy to me. How is he two? Where did my sweet little infant go? Well he is gone and now we have a wild, impatient two year old. 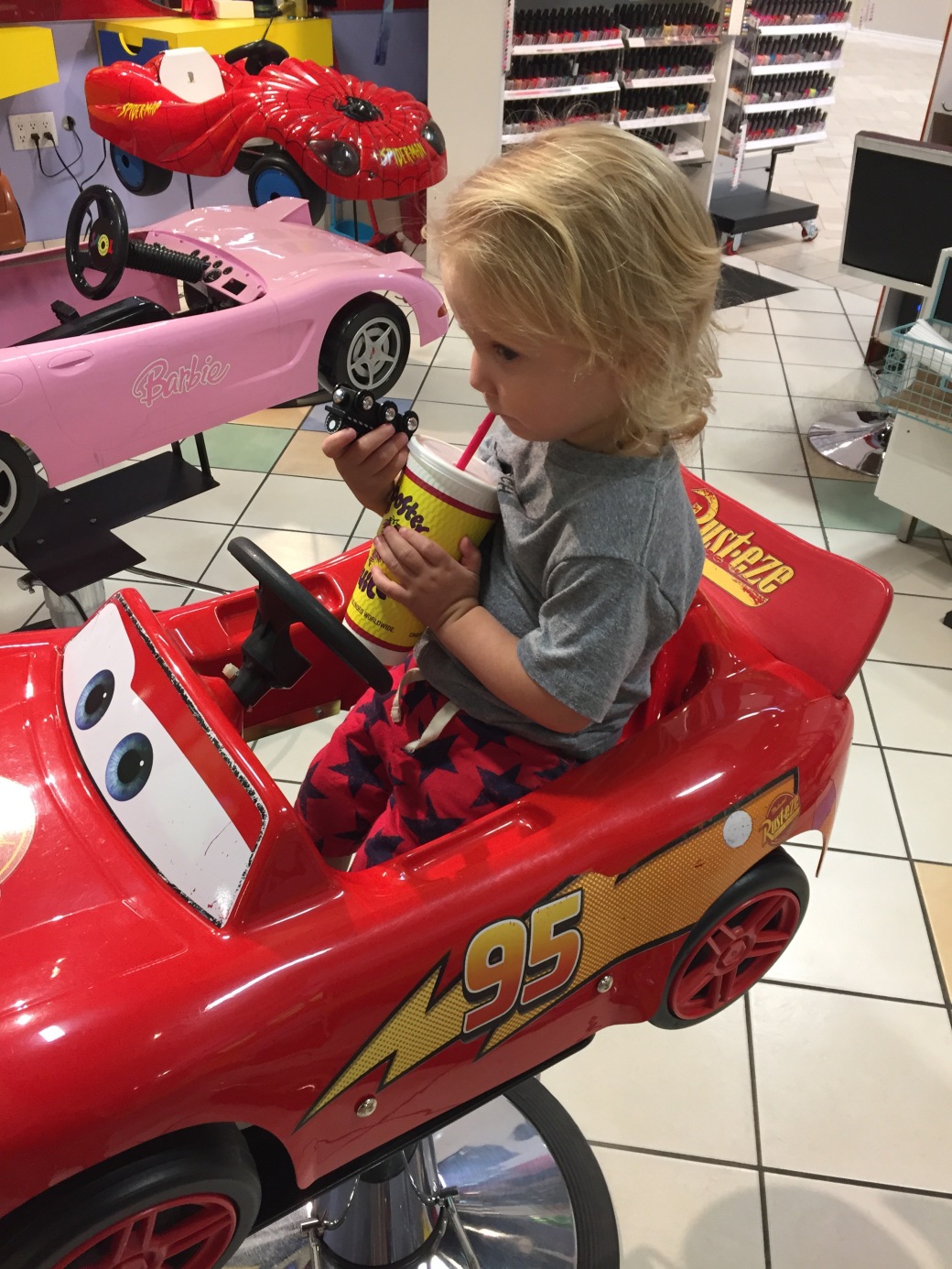 For Pearce’s birthday we also got him his First hair cut! I promised my husband that on Pearce’s second birthday we would cut his long beautiful locks – a decision to which I have strong regrets about. But my husband really wanted his hair cut, and he looks so much older now. So the Friday before Pearce’s party we woke up early and headed out to Sparky’s in Coquitlam Centre, I chose them because they focus on childrens haircuts and do a ton of first haircuts. Pearce sat on my lap and watched Toy Story 2 while the woman cut his hair, and I cried. He did really good except for when she cut around his ears and near his neck, he was very squirmy and cried a little. You are probably wondering how I kept such a wild crazy boy still. My Trick: a Booster juice smoothie. Before we went for his haircut, I took him to booster juice to get him a smoothie, so he sat and drank his smoothie while getting his hair cut. Once we were done she laminated a piece of his hair for me and I took as much as I could home. The crazy thing is he doesn’t even seem to notice his hair is gone?

Whenever my husband doesn’t have hockey on Friday we try to have a family movie night. One Friday night a few months ago we had 2 options : Sing or Moana. My husband is a big wrestling fan so we went with the obvious choice: Moana! 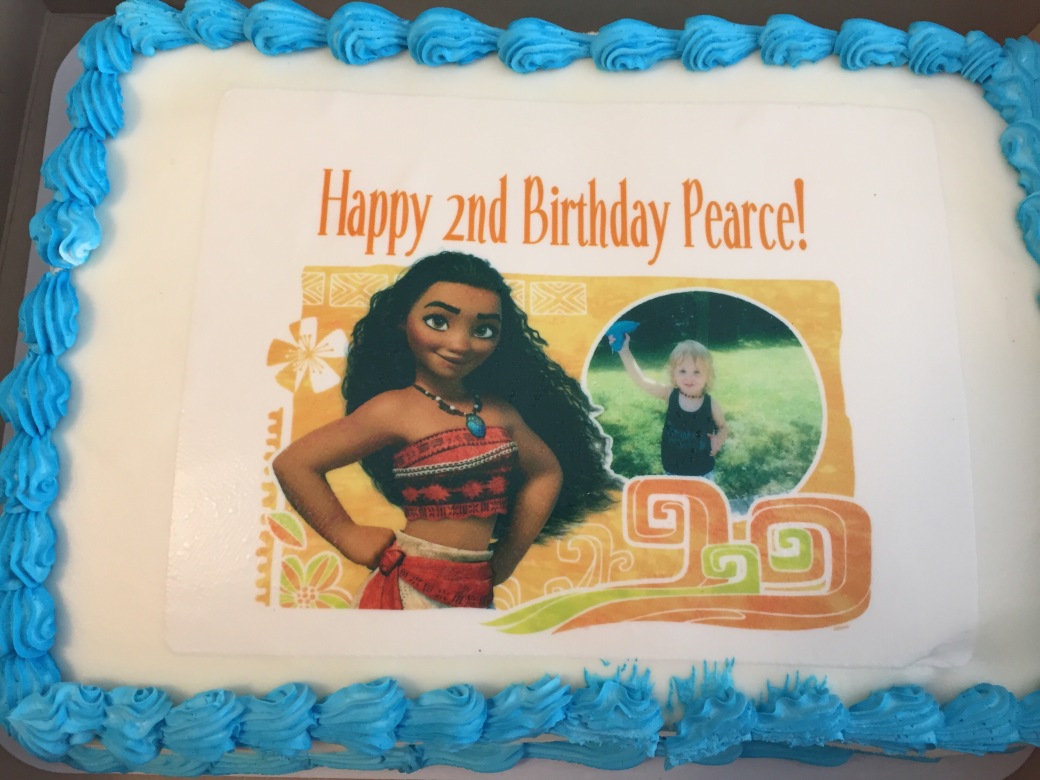 Pearce loved Moana, we all watched intently and have since watched thousand more times. Now when we watch we all sing along to all the songs and try to find pieces of the movie we missed the first 1000 times we watched. I remember May long weekend when we got stuck in the car for 8 hours, watching Moana 3 times with Pearce. So it seemed like the obvious choice for his second birthday!

I really like to make Pearce’s Parties a lot of fun, my parents always made my birthday  a big deal and I want to provide the same experience for Pearce. So I knew I wanted to try to follow the theme as much as possible! So I started with the decorations, I love Party City  as they have so much variety for birthdays with a huge online selection.  I went into Party City while visiting Edmonton for work and got the stuff for goody bags.

This year in the good bags it was:
Mini water guns, chalk, a mini coloring book and crayons, bubbles (of course), and a slinky! I try to steer away from the candy because we had a Pinata!!

The food was the fun part, Chris and I always really enjoy doing the food for Pearce’s birthday.

Moana’s boat on the ocean (jello with wafer cookie boats), Layers of sand (vanilla pudding with layers of golden oreos), Moana Cookies and Cupcakes made by the amazing Lexi’s Treats. This year we went with an Ice cream Cake because everyone loves DQ icecream cakes!

The decorations were a lot of fun, Pearce has a mad obsession with Fish right now, so Pearce and I made some fishies for the Moana wall together. Then I took streamers and made a wall of fish and the ocean and stood the 4ft tall Moana side by side. The rest of the decor was pretty easy, thanks to Party City. We ordered the Moana balloon bouquet and got some other balloons (ps. did you know foil balloons are reusable? Once done using them insert a straw into the hole to which you fill with helium and release all the air, then fold up and reuse next time!) We ordered some ceiling swirls with Moana pictures on them from Party city and had pom poms left over from our wedding and that was basically the decor.

We had family and friends come from near and far to celebrate Pearce’s second birthday and boy did that little guy get spoiled. But mostly he had a wicked time with his friends. We had set up a mini bouncy castle outside that Pearce got from his Aunty Reid for his birthday and the kids had an awesome time. We finished the birthday off with the Pinata and a nap for all of us!

Thank you to everyone who came and celebrated with us. Pearce is such a lucky guy to have so many wonderful people who love him! 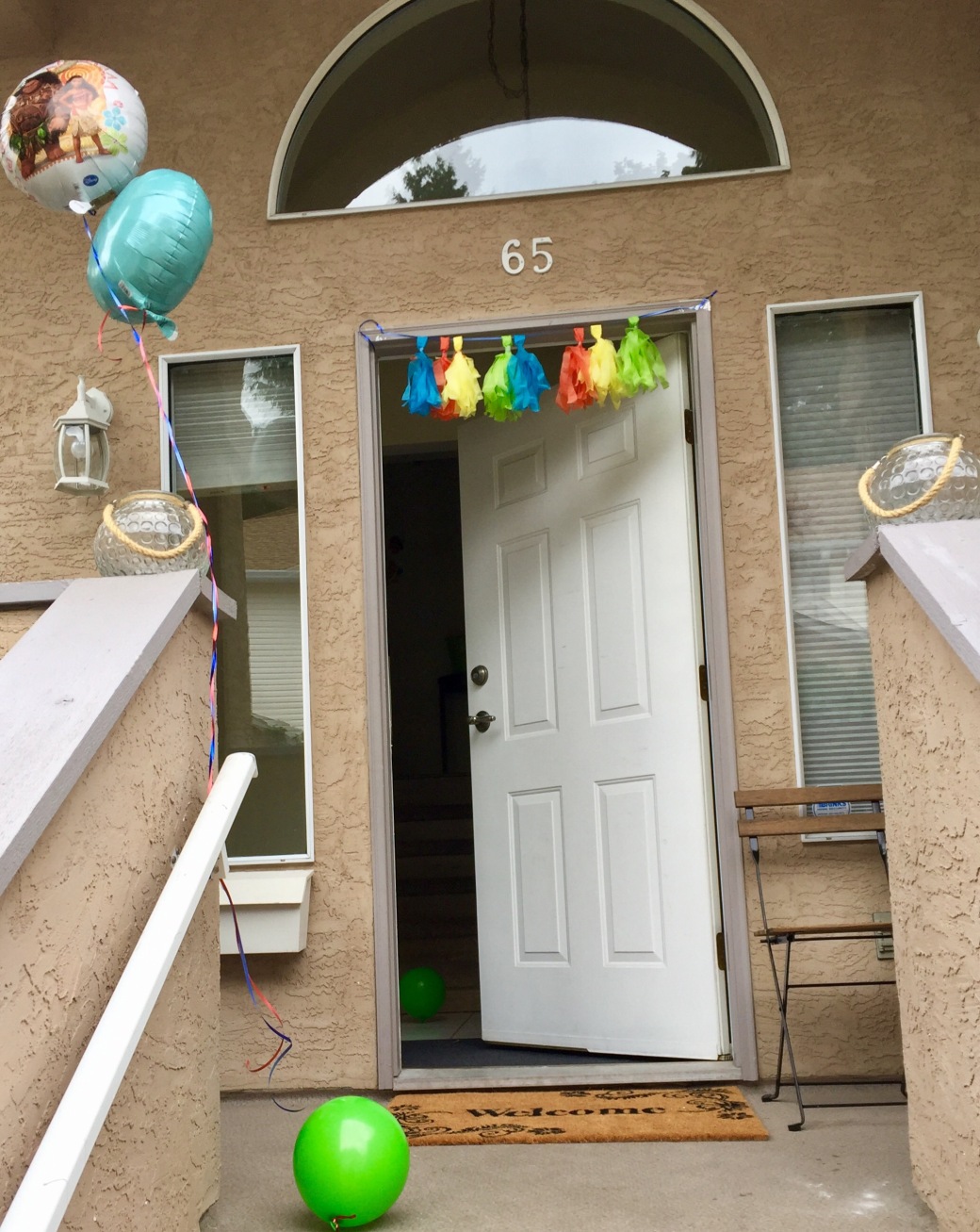 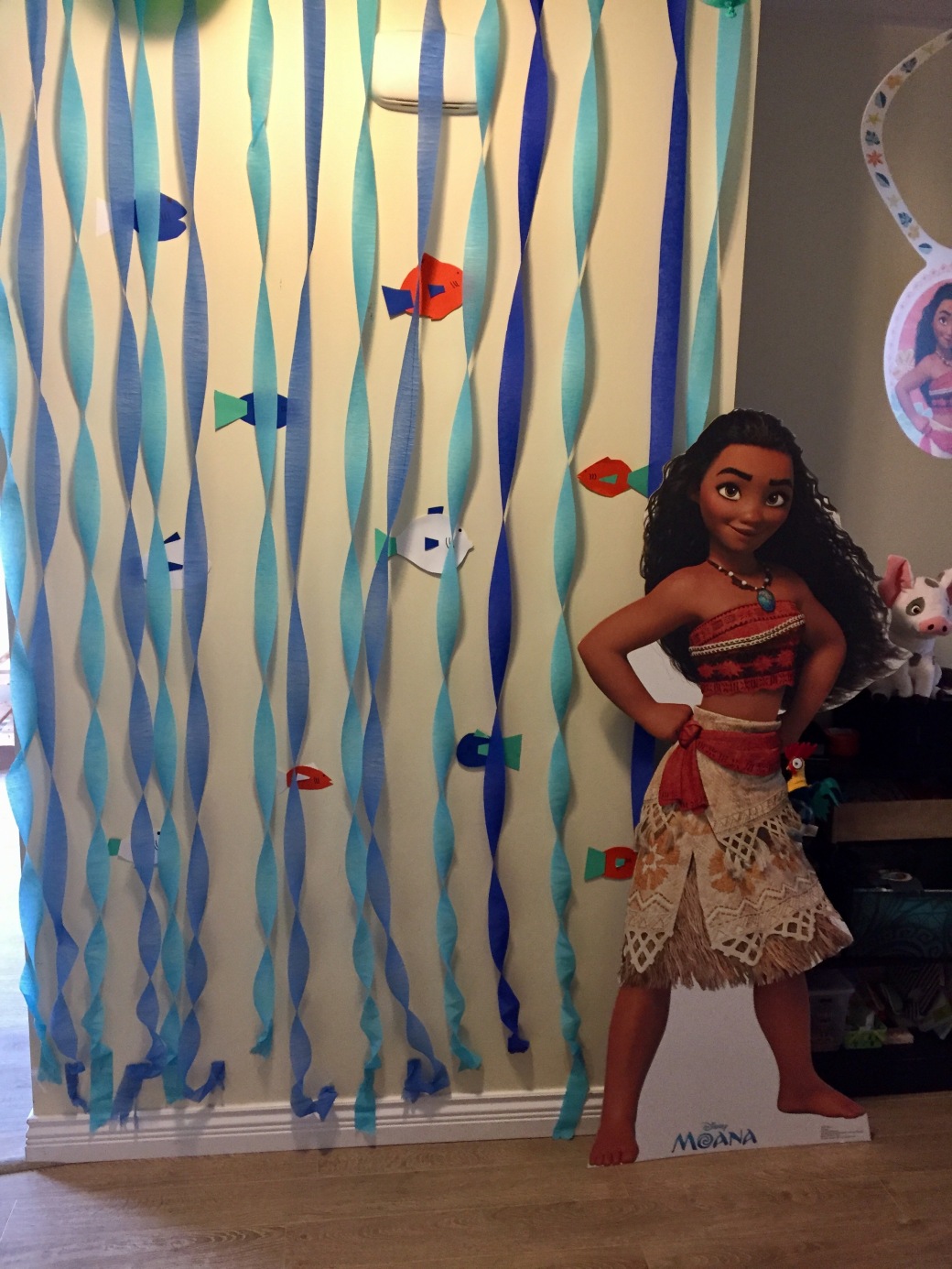 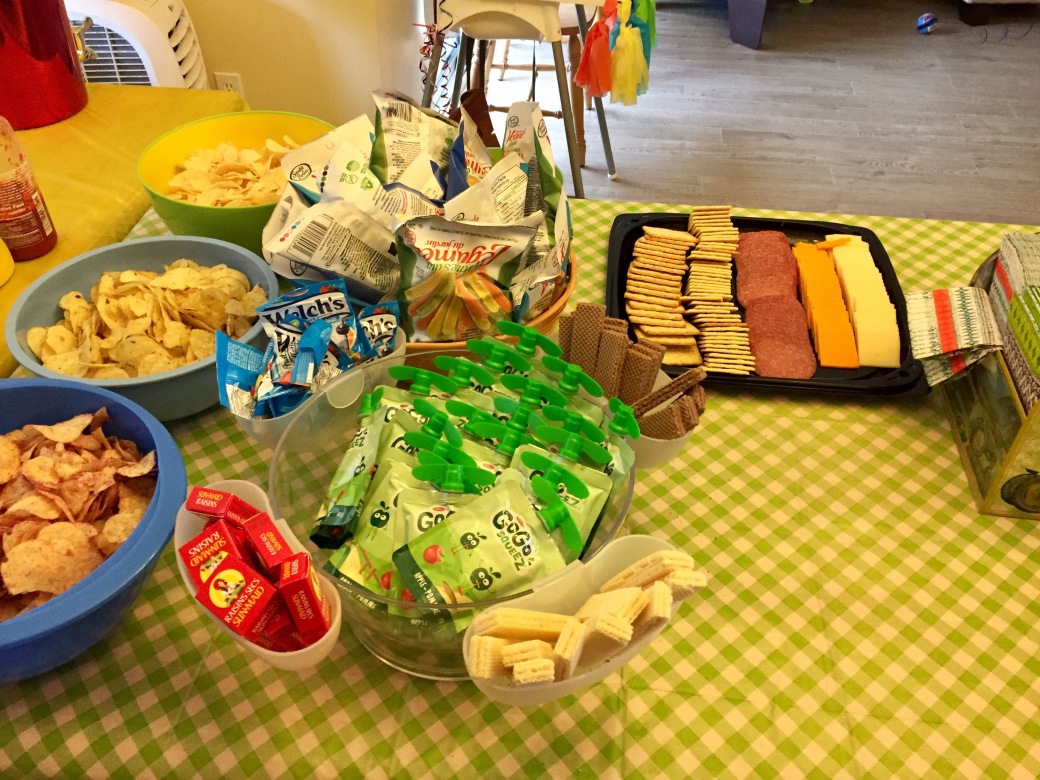